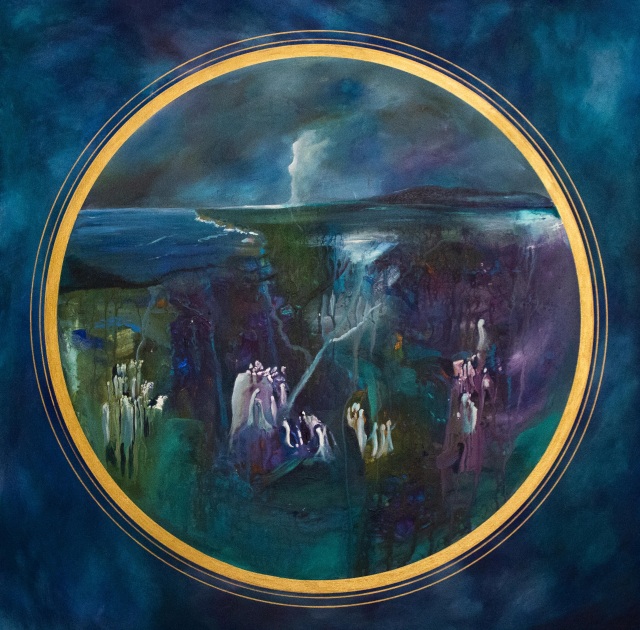 This painting was quite a different experience for me. Something playful in me wanted to experiment, to become freer with the painting process - to play really! I began this large canvas quite tightly, with small detailed shapes, but it just wasn't feeling right at all. So I allowed myself to cut loose completely. I began painting with wide brush strokes, then layering the paint on the canvas, allowing it to drip down. Then rotating the canvas and allowing it to drip another way. It was so beautiful to watch the colours merging, interacting and almost communicating with each other. It was utterly mesmerising and time slipped by unnoticed.

I stood back, made myself a cup of tea, then looked again...I could see figures, many figures in caverns beneath a mystical Celtic landscape, the sea, the cliffs, hills.... I went back to work and began to highlight the elements that I could see, accentuating them, bringing them out of the mist. I could see two figures in a cave, one figure stood over a kneeling figure, as though an anointing or blessing was taking place. Or a sacred wedding with all of the guests arriving....there beneath a Celtic brooding landscape. I was very much reminded of the tales of the Sidhe Fae. Sidhe (pronounced 'Shee') literally means "a mound". The Tuatha de Danaan are a Celtic mythological race meaning "people of the goddess Danu," Danu being a Celtic land or Mother Goddess. Other associated names for her were the Welsh "Don," Irish "Anu" or "Ana," "Mor-Rioghain," and "Brighid.

The Danaan people were associated with mounds, barrows and tumuli (small hills), they became known as the People of the Sidhe. Their association with the wind came from a belief in the Danaan presence in a whirlwind, "sidhe gaoithe," literally, a "thrust of wind." In the finished painting, you can see a whirlwind type cloud in the sky, that has almost the shape of a man or woman. It feels like the Sidhe energy rising.