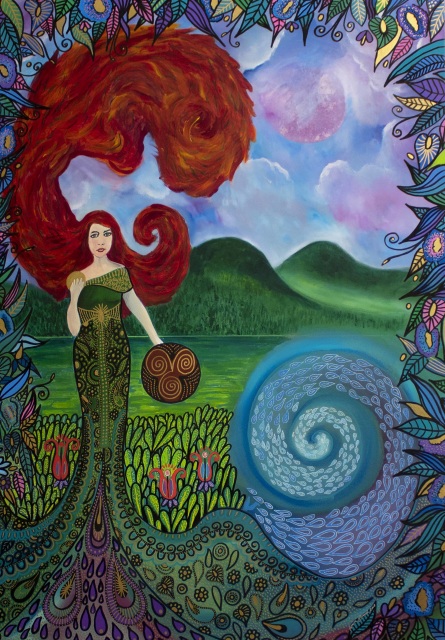 The Celtic goddess Anu, who was also known as Danu, Annan and Ana, was a mother goddess as well as the goddess of wealth and prosperity.

Danu (and Anu, Ana and Annan) was a nature goddess who was most associated with the spirituality of nature as well as agriculture with the white horned bull being sacred to her. Worship of the goddess was thought to bring a good harvest. She was also associated with wind, wisdom, fertility and regeneration in nature as an earth-goddess. The divine male consort of Ana, Anu and Danu was Belenos, a sun god and Beli, the god of the sea.

There is a mountainous region in county Kerry, Ireland, called the "Paps of Anu" which is named after her and you can see them in the painting. The area known as Munster in Ireland was certainly a place where the goddess was worshipped. The river Liffey, meaning Life, was also probably derived from the goddess.

Danu (or Anu) was also one of the three War Goddesses in Ireland called the Morrigan. The number three was sacred in the Celtic religion in Ireland and other European countries. The trinity of goddesses was therefore considered to be a powerful combination of magic. You can see this trinity represented on the shield in the painting. They apparently had the ability to shape-shift into ravens and were thought of as powerful war goddesses amongst the Celts.

References to the worship of Anu can therefore still be found today in Ireland as well as Europe. She holds a special energy for sure and is such lovely company in your home or workspace.

All prints are reproductions of my original works on canvas. The original piece was created using acrylic paint and metallic pens on smooth canvas and measures 100cm x 70cm and has found a new home in the studio I share with ANU (www.anuyou.ie) in Marlay Park, Dublin.

Please ensure to enable cookies on both this site and on PayPal to ensure your purchase runs smoothly!