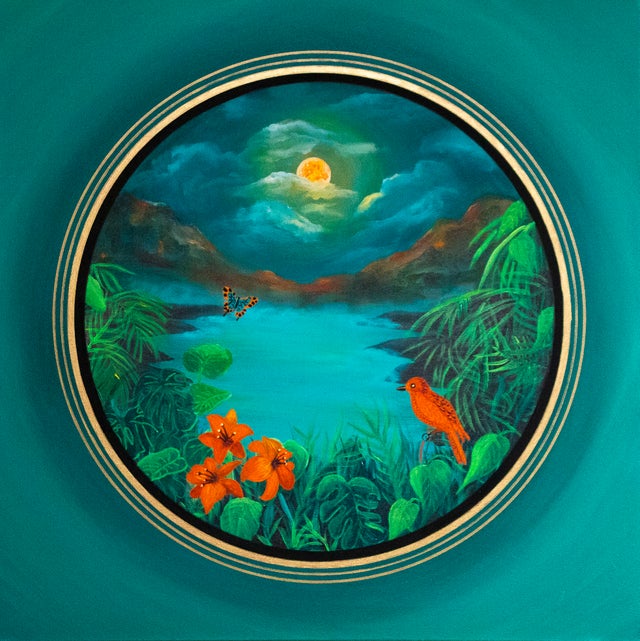 This piece is based on a vivid and very beautiful dream. I certainly am not locked down or confined in any way in the dream world....I've been traveling across space and times and to other realms it feels at times. It never ceases to amaze me. I really believe that our dreams are way more than just a sorting out of thoughts or just nonsense as people of a more rational material bent might say. "It's just a dream"....but nature wastes nothing. Ever. Everything has a reason, a purpose.

Dreams can evoke such emotions, often of bliss, occasionally of terror. I work through them on a personal level and then there are those that I feel strongly to paint. To try to bring the energy back from the ethereal realm to the material realm. And this is one such painting. In the dream, I was brought to the most beautiful lake. There were houses there on the shore. They felt middle eastern, terracotta and flat roofed, with absolutely stunning manicured gardens with a fountain in the centre. I thought, wow, wouldn't this be a beautiful place to life. A voice told me that no, one cannot own them, only rent them. They are temporary. All is temporary. I felt absolutely fine with that. Then I was taken to a small beach on the lake shore, and brought on a sweeping flight across the most beautiful turquoise healing lake surrounded by mountains which were covered in abundant verdant forests. There were the most beautiful flowers and birds. I awoke from the dream feeling so very hopeful, serene and grateful and as if something had shifted.

I've called the painting 'The Edge of Paradise" because if felt that I was taken to such a beautiful and healing place, and something deep within me was certain that there was much much more beyond it but that it was too beautiful to comprehend for now. Hope was a strong energy in the dream and I hope that it brings hope and grace to anyone who sees it.