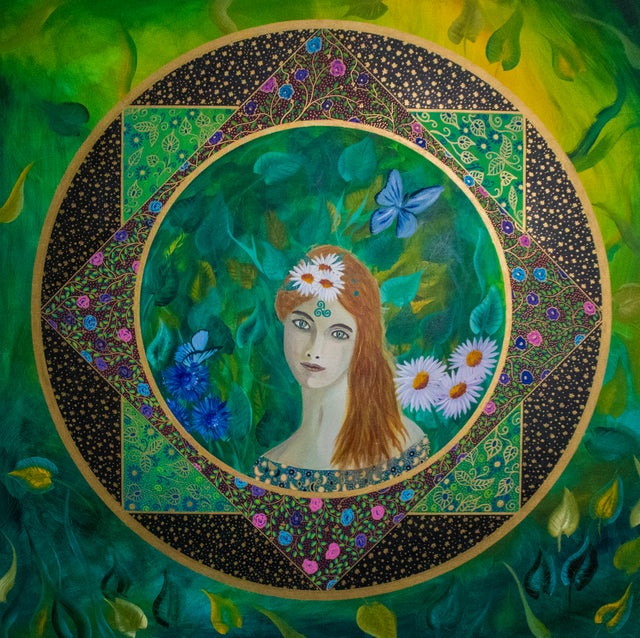 She began with something very different in mind, but as the painting progressed, I knew she was Eriú. Her name played over and over in my mind.

Eriú was a goddess of ancient Ireland. She is often seen as a personification of Ireland itself, as it was after her that this land was ultimately named.

The name Eriú comes from Old Irish, which can probably be translated as something along the lines of fullness, bounty, or abundance. This gives the name of Ireland itself the meaning “land of abundance.”

Though in these times both Ireland and the goddess are often remembered by the modern forms of her name: as Éire, or by the poetic name Erin.

She feels gentle yet so strong! Eriú was the daughter of Delbáeth and Ernmas, father and mother respectively, both of the tribe of the Tuatha Dé Danann. (The name Tuatha De Danann means “Tribe of the Goddess Danu” or else is shortened to Tuatha De, which means “Tribe of Gods”)

The Tuatha Dé Danann are a legendary race of people presided over Ireland in ancient times, to whom the great passage graves and other monuments are attributed.

Their description in myth conjures a vision of a supernatural race in their technological prowess, skill in the arts and sciences, and of course in their ability to heal and perform magic. Perhaps she is returning?