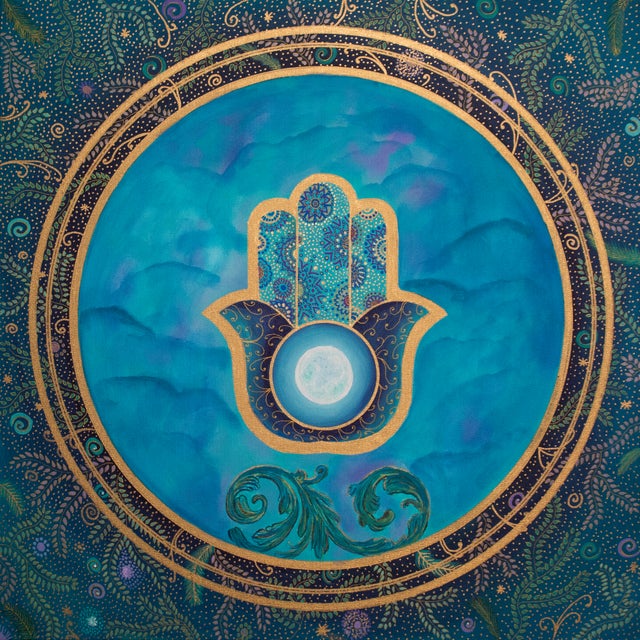 The Hamsa Hand is an ancient Middle Eastern amulet symbolising the Hand of God. In all faiths it is a protective sign. It brings its owner happiness, luck, health, and good fortune. If you've followed my work for a while, you'll know that I love the moon, and the full moon within the hand here represents the coming into manifestation of the qualities and energies of the Hamsa Hand.

A beautiful energy to have around you in your home, workplace or creative/meditation space. You can see more photos of the work in progress and in situ so you can see the scale.

The hamsa hand meaning has a few different interpretations, depending on the culture. The word, “hamsa,” derives its name from the five fingers on the hand. In Hebrew, the number five is “hamesh” and the fifth letter of the Hebrew alphabet is “Hey,” one of God’s holy names. “Hamesh” is representative of the five books of the Torah. In Judaism, it is also interpreted to be the Hand of Miriam, and symbolic of the owner’s five senses as ways to praise God.

In Arabic, it is “khamesh.” In the Sunni culture, the hamsa is associated with the Five Pillars of Islam. For the Shi’tes, it symbolizes the Five People of the Cloak. In the Islamic faith, it symbolizes as The Hand of Fatima, the daughter of the Prophet Mohammed.